The Rumuah picked up several hundred Humans from around the Earth to serve them initially. Since these did not like being enslaved, the Rumuah decided to tweak them into the first race of Cyantians. A handful of people came from several civilizations, one of which was ancient Roman Empire (including Greece). There were still a number of humans left when the Rumuah passed and many of them had never seen Earth. (They ended up going with the Rabbit and Mice primarily when they started settling.) Prior to that, they did essentially infect the Cyantians with their cultures and since the Cyantians didn't have anything of their own, they adapted and built upon all of these things, with Latin becoming a lingua franca used for international diplomacy.

Generally, the immigrant Cyantians appear to be multilingual. All Cyantians are taught the same version of Latin, although by now it is barely recognizable as such. Most species have also developed their own tongues that are easier for them to pronounce.

The Fox have developed a language rich in Guttural sounds and may sound similar to German or Dutch, calling it Khasi. This is because they wanted to set themselves apart from the Wolves, whose language is very heavily based on Latin, and sounds very similar to certain Romance languages. Mounties speak pretty much the same language as the Wolves with different dialects (although they are also heavily influenced by Digni language). Likewise for most of the other species, except for the Koyoti. Theirs is the most beautiful and poetic language - they also have a tradition of singing when they talk and this they are trying to retain, as it seems to be weakening.

They also have alternate languages which are far different that are based on the Rumuah's way of speaking and on combinations of this and their more regular language. The Koyoti speak almost unchanged from the Rumuah's original language due to having served as scribes and librarians; ironically, they are also the wildest and most feral.

Latin is not a vernacular as it was on Earth--only a general tongue (although by now it is well warped from the Earth original). Most of the other languages are derivatives of the ancients' language and native languages.

This is ONLY for imported Cyantians. The Natives have their own languages. 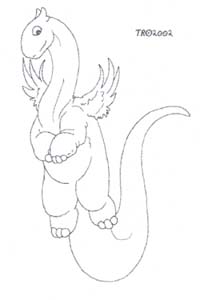