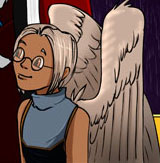 In Akaelae, he is sitting at a table in a library and is annoyed that Chatin and Cisco want to sit there; then proceeds to let his displeasure be know by taking it out on Cisco. Syrys shows up and it is clear that they know one another very well. On the way back to the Towers, Lucas falls asleep across Syrys' lap due to exerting himself. Syrys is vague on answering Chatin and Cisco's questions concerning Lucas and makes them promise not to reveal his existence to others. Back at the Tower he would meet his new roommate, Darrik, where he tells him that he too came through the "door of light", then was rescued by Syrys. In the meantime, he is unaware that he has perked the curiosity of Chatin and is bound to meet her again in future strips.