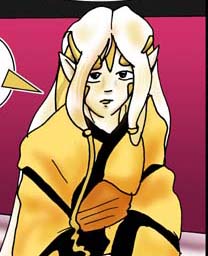 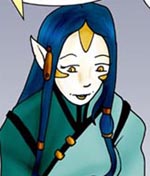 She's an almost albino with very pale skin, white hair, and golden eyes. She looks Rishan with the genetic tattoos, has Littan fangs, and some control over the color of her skin and the sheen of her hair (pale shades only though - the blue hair she gets is through the use of dye).

The ADC tried to create new sentient dice, but ended up with very fragile children, to recoup their losses they sold off the survivors. Zaile came to see them just out of curiosity what a hybrid would look like, but immediately felt a liking for Maelinn, bought her, and raised her (he discovered the hybrids died due to lack of contact because the ADC didn't know how to raise humanoid children, but he's not going to tell them that). He practically considers her his daughter. Maelinn had grown up faster than a normal child would have, due to the drugs they had her on and these drugs had also affected her health, but now, while she was still delicate in build and features, she was healthy and suffered no side affections from the treatments. Good food and doctors had seen to that. Her skin was still white. The only pigment she had was from the Kourwine, which did allow her to change the color of her skin and the sheen of her hair, but she didn't have as much control over it as they did. She had been trying to take on a less sickly color for a long time, but still hadn't succeeded. (AD Day 9, strip 30)

She has developed a fondness for Riley, though had not pursued it for fear of Littan mind control through their kiss (AD Day 9, strip 33)(a unsubstantiated one due to her immunity through her Littan heritage, but supported by Zaile since he didn't want her in a relationship yet). She would later as an act of defiance against Zaile's firing of Riley kiss him, and prove the immunity, as well her intent to have a relationship with him.

Zaile may not have been oblivious to their relationship before then, but merely thought it wouldn't progress. It was Zaile who had made the points to mention how ironic it was for Maelinn to react the same as a Rishan to Littan contact and that because she was a hybrid she would not be able to bear children. How could she? There was too much genetic difference. He figured the only way she was even created was because of the Littan DNA's ability to adapt and adjust itself to ensure survival. Zaile had said it, knowing that Riley wanted children. (AD Day 9, strip 32)

She does not have a Relay and does not want one, for the same reason Chel would not have wanted one, as well as a few other reasons relating to her time in the ADC. (AD Day 16, strip 19)