Difference between revisions of "Mischief" 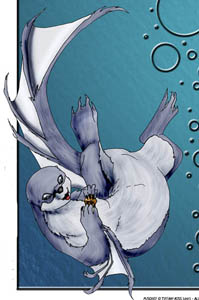 A lavender, naughty, fun-loving otter-like dice that has almost no attention span & will play with ANY mobile object, especially if its colorful!

Lexx first encountered her while trying to capture Drift - which was annoying since he needed to capture several Dice before he could capture her. (AD Day 11, strip 3) She meanwhile had no reason to not annoy him, and grabbed one of his Modifiers when he rolled them, (AD Day 11, strip 5) although Epsy was able to recover it from her (more or less) while Stealth got Drift.