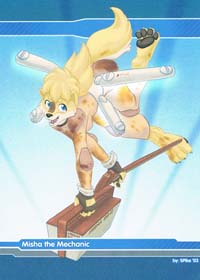 Full Name: Misha Lu'nar
Species: Gold Fox
Age: 17
Type: Engineering
Function: Maintenance
Quote: "Arf!" or "Cool! I can see my house from here."
How much experience do you have with roleplaying? Probably not as much as everyone else here.

What is your character's personality? She is not at all aggressive (she spends every morning meditating). She is quite extrovert or outgoing and likes to joke around.

What things does she like? She absolutely loves speed-climbing and rappelling. She also likes to pilot around on any kind vehicle. Don't give her coffee, since that will only make her go totally hyper.

What are the strong points of your character? Physically she is very agile and dexterous. Intelligently she is very competent in her field as mechanic.

Name one thing your character would never do and why. Hurt anyone intentionally as she was raised from her childhood not to. She also won't suffer from any vertigo when on high locations since she has trained that away.

How does she interact with others? She is very extrovert but easy to talk to. Also she has a behavior to touch others.

Give an example description of your character. Misha is taller than a normal fox. Her fur is predominantly light gold with a white muzzle, torso, feet and tip of tail. A dark gold patch is between her eyes. Her eyes are crystal blue.

Why is it essential that your character be here in the Mars Academy? She can repair and maintain mechanical units as well as enroll for scientific research at the academy as guinea pig.

What is her view on other species? She is very open minded about other species. As she was raised at space stations with a traveling pack of mounties, she haven't witnessed any cruelty made by gold foxes. She treats everyone with the same respect and won't understand discrimination done by the coloration of one's fur.