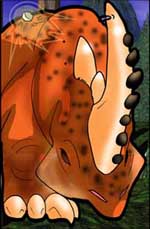 The alien's most valued Dice, he was sent to fight against Lexx for the challenge of going against one of the best players in the game. He may move slowly, but his mind is just as sharp as any other Dice. (AD, Chapter 2, strip 22)

After Lexx induced him to hallucinate old enemies from before he was a Dice, his owner conceded the win before he could seriously injure himself. (AD, Chapter 2, strip 24)