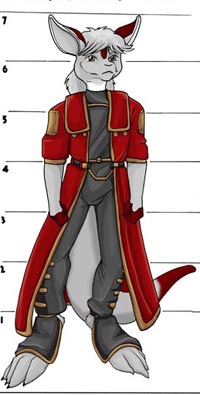 One of the five Kangaroos to be genetically-engineered by Exotica Genoworks, they were given over to the Fox militia, where they were abused. He managed to escape with the other Kangaroos who first took refuge with a Fox family, then eventually left and made their way to Centralis. It would be there that they would recieve citizenship and make something of their lives.

After the Centralis War, They would receive their ship and christen it 'Independence'. They would make regular shipping routes to various worlds, including Earth. It would be there that they would meet up with Mako, and pick up Tamera, Rayne, and Darrik.

In later comics, they would find a derelict Fox ship and discover a Tree Kangaroo who is connected to the ship's computer. They name her Nil and make her a part of their crew. Outback would become close to her. Upon returning to Centralis, they go on a little R and R to Sunset Haven along with Zax, except for Outback who wants to remain behind to look after Nil.

Outback would then reveal to Kel that he has had enough of being Cere's crew member, feeling bored, burned out and trapped, and wished for his freedom. (Sink or Swim, strip 221) Kel offers him a position to oversee the construction of a staging island on Earth (a small facility for research and recreation staffed mainly with aquatics and a weekly rotation of students) that they own through Human contacts. (Sink or Swim, strip 230) Outback accepts this, and with Nil in tow (to hopefully get her away from the Fox pursuing her), he leaves for Earth. (Sink or Swim, strip 231)