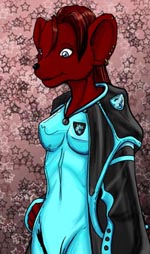 She was spied upon by Marcus after she had finished taking her bath, or shower, and was drying off. She somehow learned of this and teleported next to him to punch him. Eventually she would end up tutoring him in Technomagery.

She would later be brought Marcus and a misbehaving Galen, and would try teaching him how to train an aggressive gryphon chick - unfortunately he wasn't paying close attention. [1]