Name
Akaelae, Quinn
Nickname
Muerte (in Campus Safari)
Species
Sirac
Occupation
Student (in Akaelae), Cov Ops (in Campus Safari)
Appearance
A female raccoon of average height, perhaps 5'7", with very pale gray fur on her muzzle and down her front, shading to a light gray above her charcoal color split-mask over her shoulders and down her back and tapering off on her thighs. Her tail is banded with even stripes of charcoal alternating with the light gray to the pale tail tip. She has wavy medium brown headfur that's sometimes braided into dreadlocks or just left loose in a slightly punkish style and emerald green eyes. Almost absurdly thin considering the average appearance of a Terran Raccoon. She has cream colored hands as opposed to black.
Height
5'6"
Weight
130 lbs
Age
(12 chronologically) 20 physically (in Campus Safari), (3 chronologically) 13 physically in (Akaelae) 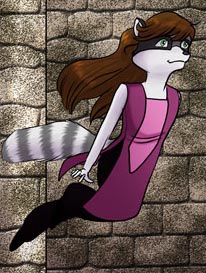 Quinn is the elder of the two Akaelae Siracs (by six months). Rescued by Syrys in the Prequel during the incident that destroyed Exotica Genoworks' main installation. She was adopted into the Akaelaes.

In Puppet Strings, she, Collin, Chatin, and Cilke head out into the wilderness on a camping trip and proceeds to cause all sorts of mischief (like bothering Collin with Mr Dew). But it would be during this time that she would foil Marion's attempts at stealing data crystals that were found.