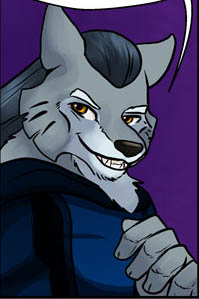 Born deformed, along with Raire, and had to go through extensive surgeries to correct this. (Akaelae, strip 260) They were temporarily abandoned by their father shortly after the suicide of their mother and they were both taken in by Alpha. (Akaelae, strip 262) Shean returned, but Rama was a changed Wolf. He never forgave his father for abandoning him and did not take well to his return. Rama wanted to be adopted into the Akaelae family. Shean's return, however, would not permit this. Thus, Rama ended up believing that the Akaelaes did not consider him good enough to be one of them. (Akaelae, strip 263)

For 226 rots afterwards he was troublesome, hot-headed, and argumentative, but still got along them. (Akaelae, strip 264) Then he fell in love with Sirene, daughter of Alpha, but was forbidden to have anything to do with her because he was a hybrid. The fear from Alpha, and Shean, was that such a union might produce more deformed cubs. Alpha, not wanting to see her heartbroken from this, sent Sirene away. (Akaelae, strip 265) Rama tracked her down and continued courting her until Syrys caught them and gave Rama a savage beating. This was to further Rama's downward spiral into his hatred toward the Akaelaes. A year after that incident, he left. Five years later, he returned and was responsible for the Elite War--A.K.A. Ridge Wars. (Akaelae, strip 266) It turns out that he had been living amongst the Fox for a time, "encouraging" the Red caste to rise up against the Elite Fox (White, Silver, and Black). The war would spill out into the Wolven lands and the Fox saw that the Wolves had better technology and weapons than their own and decided to get their hands on it. But when Rama saw that he was losing the war, he savagely turned on his own teammates and went AWOL on the Fox. This would, however, not save him from being banished to Earth for four hundred years.

In Akaelae, he has managed to return to Cyantia through a warp gate on Earth. Is planning to take over Centralis and wipe out the Akaelaes. Eventually causes the Centralis War, but loses. Zax Akaelae escapes from his control.

The US actually did some things first, mainly be accessing one of the Cyantia gates and giving weaponry to a certain wolf for his takeover of Centralis, in exchange for technology. Of course, Wolf took the guns and ran, never to be seen again and failed in that takeover. Then, the gate was shut by Alpha and his wolves in a process to cut off ALL accidental crossings before they were ready.

In Campus Safari, he is hiding on the Mars Academy and currently plotting to spoil things once again for the Akaelaes, with his associates Zimae and Rezna, and after Rezna's death just Zimae. He has disguised himself as a priest, and keeps the hood of his robe up whenever he's out and about to prevent discovery. It is here in Campus Safari's storyline when it is known that Calle, a C-group skunk, is a servant to Rama. (Campus Safari, strip 258)

After Rezna's demise, he brings in a new contact, who just happens to be an Akaelae. (No Angel, strip 58)