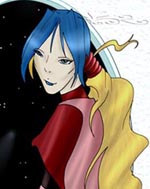 Sari is a doctor who works on the Sriven, who wears a not quite standard doctor's uniform and has her hair dyed dark blue. She seems to be a bit of a flirt, as well as touchy-feely, using whatever excuse to grab onto whichever male was closest to her. (AD Day 14, strip 58)

She worked on Lexx's injuries after his battle with Acadiu, claiming to be pleased to be working on a well-built young man, for although she sees Riley at least once a week, she finds him to be too stringy thin for her tastes. (AD Day 14, strip 58)

Lexx found her scary in her flirting, and Riley agreed, saying he feared the day he ended up in medical unconscious. (AD Day 14, strip 60)