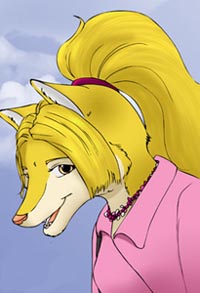 Sheana is a golden wolf with white undertones and light brown eyes. She tends to like to wear her hair up and has a preference for wearing clothing that varies in shades of gold and blue.

She's a very outspoken young wolf with a clear head on her shoulders, although it can often be clouded by a certain white wolf she's had a crush on ever since she laid eyes on him.

Sheana's a techy wolf but doesn't really have an aim in her life of doing anything in particular. She just wants to be with her friends... and Darius Akaelae. She's the type who takes what life gives her and makes the most of it. Despite not really having an aim in education, she does have a strong aptitude for engineering, primarily in biology.

Sheana lost her father when she was a very small cub (about age 2) due to his habit of constantly cheating on his mate, Sheana's mother. Among wolves this is considered an offense that is taken care of by the cheated upon spouse. It often doesn't end well, and unfortunately for Shean Tibal, his time as an Elite Wolf had run out - he was aging normally and the healing factor he had so long relied upon had stopped working. He was caught in one of his trysts with another female and badly mauled by his angry wife. Shean died, and shortly after (age 3) young Sheana also lost her mother in a shuttle accident. Left an orphan, she was brought into the Akaelae home to be raised by Shean's longtime friend and fellow Elite Wolf Alpha Akaelae.

During Akaelae, Sheana is unaware of any legacy she is carrying, being too young to know fully what it means - it's all beyond her. She's too busy thinking about Darius, classes, and her friends to think about the future that she will have to take part in one way or another.