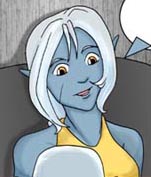 Station officials took her away at birth from the Shiras, so they never saw their daughter, and sold to a Rishan couple who could not have children and wanted a baby girl. She grew up to be hyperactive, reckless, and more trouble than her adoptive family were willing to deal with. At age 15 she was replaced with a more agreeable child, and she's been living on her own ever since. (AD Day 10, strip 35)

She resembles her birth mother, and her voice is almost the same. (AD Day 10, strip 35)

She has issues with wearing clothes and doesn't care who sees her... i.e., she's the kind of girl who answers the door naked after a shower to get the pizza free because the pizza delivery guy forgot what he was doing.

Kane's just a thief.. a very good one, but only a solo thief, and a con artist. (AD Day 19, strip 31) She's also an escape artist. She has warrants out for her arrest.

Most of what Riley had seen of her past had been petty crimes, but in-depth research amazed him with everything she had done that he missed, along with involvement with other known criminals. (AD Day 19, strip 46)

Riley in his attempts to reunite the family secretly arranged a premium visitation for her with Lexx.(AD Day 10, strip 28) When she later tried to use her contact with Lexx to blackmail Zaile, he had to reconsider his position and arranged the circumstances for her arrest.

She knew nothing of her brother, and hated the game, but was willing to jump at the opportunity to gain from an encounter with him, due to his being part of the situation she was in (the ADC wanting her due to his popularity). (AD Day 10, strip 35)

The ADC had offered a 10,000 crid reward for information on her leading to her 'employment' - a decent enough reward for bounty hunters to take notice. (AD Day 10, strip 34)

After meeting Lexx, he gave her directions to his island. (AD Day 10, strip 35) Once there, she decided to go for a swim, and monkeys stole her clothes. That's when she met Damian, who was excited to bring her new clothes, as well as other supplies, just as she wanted. (AD Day 12, strip 17) She was quick to notice he was friendlier with Lexx than Lexx was with him. (AD Day 12, strip 19) When Lexx objected to Damian's plans to develop the island into a resort (which she liked), she tried to push to claim half the island for herself, which Lexx refused. (AD Day 12, strip 23) Although Damian did build her her own room with a beautiful view of the ocean, she felt jealous, because all the building done was for Lexx and not her, (AD Day 18, strip 15) and she was quick to lay claim to it if Lexx didn't like it. (AD Day 18, strip 16)

She overheard Riley telling Damian about Zaile being Lexx's brother, and realizing that meant he was her brother too, she immediately began scheming to take advantage of the situation. (AD Day 18, strip 60) She decided to give Zaile a private call from her ship to get him to pull a few strings to get her warrants closed, and threaten to destroy Lexx if he won't. (AD Day 18, strip 81)

The island was safe, but it was also boring. It was too slow for Kane who preferred the wilder life she enjoyed on various space stations. There weren't any parties here, men to infatuate or games of chance to enjoy. Damian was here, but he was just a silly little toy to Kane. He wasn't very bright in Kane's book and very shallow. Manipulating Damian just wasn't a challenge. He was too nice. (AD Day 18, strip 81)

She soon contacted Zaile, and threatened to tell Lexx about Zaile and their youngest sister. (AD Day 18, strip 117) For her silence, she wanted a Dragonwire Ship, fully fueled and stocked. Two million crids and all of her crimes purged from the galactic records. (AD Day 18, strip 118) He agreed provided she leave Lexx alone permanently once she stepped on the ship - she agreed, for she didn't care about her siblings unless she could benefit from it. (AD Day 18, strip 119)

When the Dragonwire ship arrived (a luxury ship, meant for those who had places to go and wanted to go there fast or slow and in comfort), she slipped out with no one seeing her wearing a dress Damian had special ordered for her to wear to a party she didn't intend to attend. (AD Day 19, strip 41) Unknown to her, an alien creature had piggybacked on the ship, and when she boarded, it went on the island and assumed her form. (AD Day 19, strip 43)

Once captured she was chained up, put in standard prisoner garb, and collared with a location and control collar so she wouldn't be able to get away easily. (AD Day 20, strip 85) Her wrists were shackled with golden bracers on a retractable cable that allowed her hands to separate two feet, but at the push of a button on the control remote, would lock together. While imprisoned, her only regret was being too greedy. (AD Day 20, strip 101)

While she was in jail afterwards, the ADC approached her, offering her a large amount of money, a ship, and her freedom (along with all her criminal records being erased) (AD Day 20, strip 102) if she would let them harvest her eggs. (AD Day 20, strip 103) She outright and angrily refused. "My body is mine and nobody else can have any part of it ever.... I have never sold my body and I never will. It's the only thing that is always with me." (AD Day 20, strip 104)

Kane's methods were always escape over confrontation. She was not much of a fighter, but she could run if given the chance and she would figure a way out eventually. (AD Day 23, strip 71)

Andisel would come up with a plan utilizing her, and promising her much in exchange for her mission, would send her back to Earth with Korbaen Dasch. (AD Day 23, strip 117) Once there however, Korbaen had his own plans, and told Kane that she could take his ship if she wanted to do the mission, but he wasn't taking part in it. The only problem was he was her contact with Andisel, and without him she couldn't complete the mission. She would lose out on everything Andisel had promised to give her when she returned with Lexx. Her criminal record would be wiped at all alerts would be dropped and from Andisel's words, there was a huge bounty on her capture that had recently been put up that would make it impossible for Kane to travel anywhere in the universe. There would be no one she could trust who wouldn't turn her in for the amount promised, it was that high. (AD Day 25, strip 32) She was fearful of his plan to approach the humans, having heard tales of how they'd put them in a lab and dissect them. (AD Day 25, strip 33)

Would be given a role to go around on talk shows as an actress playing an alien in a movie and taking her role seriously so she could tell the truth and no one would believe it. (AD Day 26, strip 115) The agent responsible for Kane had given up after the first interview. He had fed her lines and she had sat there in complete silence with a deer in the headlights look. They let her run with that and she was getting better at simply repeating things that had been said in previous interviews by Korbaen when it seemed appropriate. Most of the time, she said nothing. (AD Day 26, strip 117)