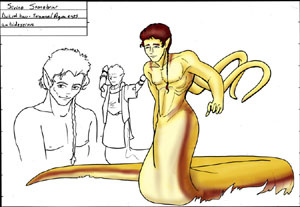 Since he was raised in a small community, while young he was treated as just a deformed kid by some with pity, others treated him as though he was normal.
Event in mind, that Syke really liked was simply that some older, bigger kids were picking on him in school, and he wouldn't stand up for himself even though they pushed him down and just picked on him... because of how the ogres treated him that he shouldn't fight back or defend himself.
Noting that he kept coming in scuffed up, the schoolmaster figured out what was going on... and that it was his own son doing the picking and pretty much told Siv he should stand up to him because nobody should be treated like that and if nobody stands up to the bullies, then they continue to be bullies and pick on more than just you. They pick on smaller weaker people as well.
This was a bit AFTER he'd already had quite a few lessons in the art of self defense and swordsmanship from his adoptive father. He always considered it a game, even though his father was simply training him to defend himself for when he became an adult and might have to leave their city or if someone came in who was an outsider.
The statement from the schoolmaster sunk in just the right way and the next time the bullies picked on him,... he beat them up, and proceeded to break the schoolmaster's son's arm accidentally. Kid fell off a pony trying to get away. Wasn't really Siv's fault, but Siv went immediately to state what happened to the schoolmaster, pretty much though, taking the blame himself: Kids picked on him, he fought back, other kid tried to get on a pony, who was already afraid of Siv, pony bucked and kid fell off because Siv startled it.
Response: Schoolmaster sided with Siv, informing his son he deserved what he got for picking on him and broken bones are a part of being a boy. And... surprisingly, Siv did become friends with that boy.