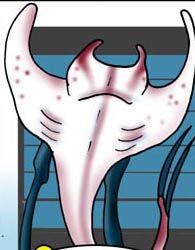 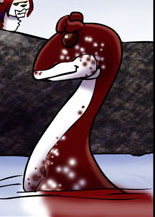 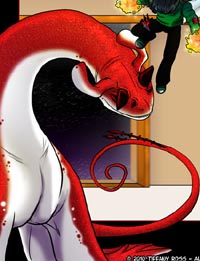 At level 4 Skate resembles a colorful manta ray, with red main wings and blue secondary wings, with tentacles above her eyes. As she levels up she will more closely resemble the loch ness monster.

Though being a Swim dice, she has the ability of limited flight and so can travel on land as well as water. She is friendly, but often forgotten, being one of the few among Lexx's Dice who do not speak.

Even though she's unable to speak, Skate is in every way as intelligent and conscious of what's going on around her as the other Dice, and she likes Chel. (AD, Day 4, strip 10)

If given the choice, she would sleep on Chel's bed like the other Dice do, but the other Dice object since she leaves the covers wet due to her habit of spending most of her time in the water. (AD, Day 4, strip 25)

At Level 6, she was one of Lexx' largest Dice, a mass of muscle and bulk that could move far faster than one would think. Unlike the other Dice that were ordered by Lexx to fight him seriously (in the hopes of leveling him up faster to rescue Chel), she was to only spar with him since the risk of her injuring him was too great. (AD Day 23, strip 28)