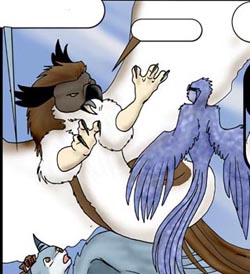 She's a blend of avian and serpentine characteristics. Somewhat vain. Though large, she can be hard to see if hiding beneath canopy or against the rocks. The length of her avian and serpentine blended body stretched out in almost a perfect blend to the rock surrounding her. The lighter striations in her feathers looked very much like rocky veins from a distance. (AD Day 18, strip 21)

In trying to catch a falling Chel and slow her descent, she accidentally scratched her with her razor sharp talons. (AD Day 18, strip 48) Felt guilty afterwards and let Lexx capture her without further fight - Lexx put her in dice form anyway. (AD Day 18, strip 57)

This article is a stub. You can help the ShivaeWiki by expanding it.