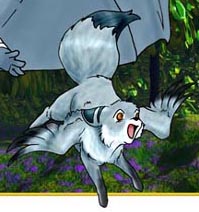 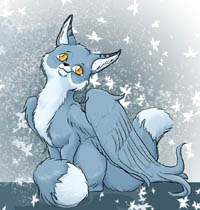 He looks completely different and is much smaller this time than his previous two forms. (He can't even fly at level one because his wings are too small. (AD Day 18, strip 28)) Although probably bonded to a red fox, his coloration is blue with feathered wings. He quickly developed a dislike of hunters and hunting dogs when dragged into a fox hunt. (AD Day 14, strip 2)

Leveling up to level 2 his muscles strengthen and lengthen with bones and feathers. His body also grew and his tail separated into two plumes. He gains the ability to fly. (AD Day 18, strip 34)

His agility gives him the ability to run at a very fast speed for short distances, returning to normal speeds when going further. (AD Day 14, strip 3)

Fled when he heard Energy howl, grumbling about Lexx always sending Energy after him... only to fall in Dig's hole and get captured. (AD Day 14, strip 3)

Swiftpaw is bad in the dark. Early morning, daytime and early evening are Swiftpaw's times, and he is afraid of the night. Lexx is sure that Stealth had something to do with Swift's fear of the dark. (AD Day 20, strip 9)

Does have they ability to squirt musk when severely stressed. (AD Day 26, strip 132)

Keith Ritter would offer to be the caretaker of Swiftpaw when everything is over, and Swift seemed to like the idea. (AD Day 26, strip 156) 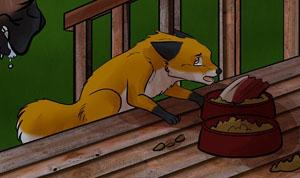