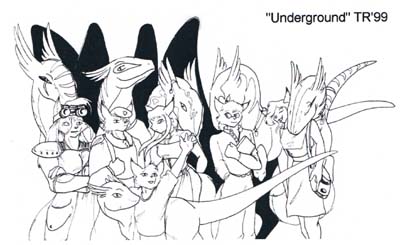 Chapter count
6 chapters
Status
Incomplete
Canon status
Unknown (?) (though listed as a title she planned to make into a GNIP someday in the Campus Safari Rough Edition publication)

Prince Kiet'sune returns to Vixinte shortly after it is decimated by the plague. At the landing pad outside the city he encounters the sole survivors: Tira, Tip, Vic, Art, Corona, Kamikaze, and Scout, and returns to their base in the Volcano Burrows.

No sooner are they there than they have to set out to drive off an Irinco attack, who are using the opportunity to steal all the trees and take the dirt from the Fox lands to a depth of 1 mile to obtain Cyantian metal. They barely manage to drive them off and scavenge the remains for parts to repair their ship Star.

Deciding to get help, Kiet borrows a Shivae and heads across the mountains to a Wolf city, while Kamikaze follows shortly after on horseback. Kiet's Shivae soon returns without him, and along with the rest of their Shivae (six total, named Syke, Thief, Swat, Missile, Scatter, and Angel) push the remaining foxes into Star just as the Irincos return and start bombing the volcano.

In their escape attempt they accidentally enter a gate and end up crash landing in the White House's back yard. They barely escape and find their way into the storm drains where they encounter what appears to be an abandoned Fox dwelling.

Tira befriends a human named Cedric, Syke makes a couple attempts to eat Socks the Cat, and Vic gets captured on a supply run. Silver later rescues him and joins the group where it is revealed she's an old friend of Tira's and an old enemy of Corona's.