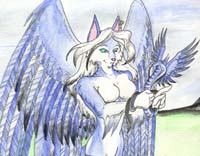 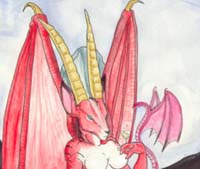 The Mounties have 3 goddesses of a sort, referred to as the Three Sisters, who serve as 'godlike ones', though they're not really 'worshiped' in the sense of goddesses. They aren't goddesses - they are real, physical beings who have been endowed with seemingly supernatural abilities. (They are the ORIGINAL technomages and the technology they have is far superior to anything the Cyantians have created because it has also given them immortality (supposedly, they were created by the Rumuah).) They are brought tributes regularly for their protection of the areas that they cover, which are the majority of the Mounty lands. They are primarily Mounty deities. (They do not consider themselves goddesses or anything of the sort, but instead, Guardians.) They DO have those who follow their teachings. They will take notice of their followers' actions and will not tolerate deviation from their teachings in a way that is against their ways. The three will often appear in various temples around the mountains during the year to teach, mostly orphans who tend their temples. They play a BIG part in Genoworks Saga and will also be mentioned in Gralen Cragg Hall.

Each one has an accompanying Wisp.

They forbid the eating of other sentients. (Darius, strip 195)

They started as characters from some old short stories of Syke's, but were renamed when brought into the now offline Cyantian MUD. (old names in parenthesis)

Zylac (Nix)
Teacher - a winged Cougar, the cheery one. She has a brightly colored golden wisp with red feathered wings

Zyra (Taera)
Warrior - a crimson Ram with long golden horns (despite being female) (red with a white muzzle and underside, thin black stripes, red leathery wings, green eyes and golden hooves). She has a red wisp of the variety that have bat like wings.

Most Cyantians know about them: most don't believe they exist, but they do.