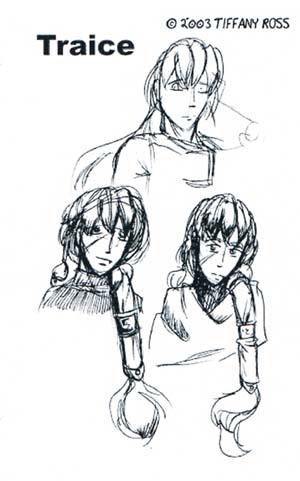 Traice was a former roommate of Lexx in the ADC and is a Littan/Kourwine hybrid. His mother was a Kourwine, his father a Littan. Littans don't look down on crossbreeds, even though they are discouraged since many times they ARE born solo and solos that remain solo are looked upon in two ways. In some religious circles, a solo without even a soul twin is marked for the priesthood. In others, a solo is VERY unlucky and doomed to always be alone. This is how a lot of Littan children have ended up with the ADC. Traice just has the added misfortune of being a hybrid. He has the best qualities of both races and none of their problems.

He's very DIFFERENT from Lexx, since he's pretty much embraced the lifestyle of a dice and is a good year behind Lexx, also very popular. (The Kourwine-Littan Hybrids are really darn cute.)

He has been shown in sketches, but hasn't appeared in the main storyline yet.