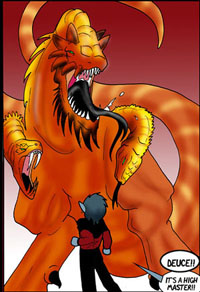 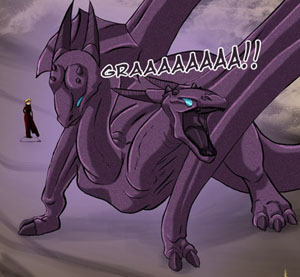 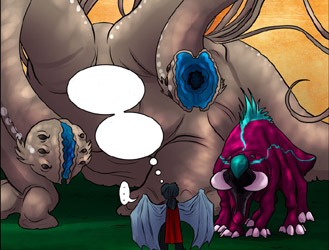 Trasik is the only female in her family, and quite spoiled. She's pale with thick blonde hair and brown eyes.

Birthmates with Domic and Tairil - they are her favorite brothers. (AD Day 20, strip 9)

Does not get along with Mauki after she killed his favorite Dice (and feels no remorse since she felt she taught him a lesson about getting attached to your Dice). He hasn't spoken to her in years. (AD Day 20, strip 11)

Trasik is Lexx's greatest enemy. She seems to have a particular hatred of him due to their past,... in which she's always been the bully and him the victim. Her only losses have been to him, and she can't forgive that.

Not the most pleasant of aliens and a Littan who quite enjoys the taste of blood,... preferably human or Rishan. Falling into her hands would not be a good thing for Lexx and unfortunately, she has come up with various ways to force him to battle her and her family.

On Day 16 she was in a bar in the closest away station in the middle of an elaborate party,... complete with some very lascivious activities. Riley kept that viewscreen window the smallest (since he was keeping track of her activities). He wasn't interested in his older sister's debauchery. He hoped their parents were watching. There would be some strong words from father and mother about how badly her actions reflected on their good family name. (AD Day 16, strip 19)

All of her dice will fight to the death rather than lose and get punished, and she has no problem with pushing her dice too far or accidentally killing them. She has fought Lexx twice before, and lost both times - the first time she underestimated him, the second she almost killed him but he managed to win (though he had to kill her Dice because she refused to recall it no matter how severely injured it was). (AD Day 6, strip 26)

She is very good at the Game, and her losses to Lexx were the only ones on her record. (AD Day 6, strip 27)

All of her dice are poisonous or nasty except for Tacione. (AD Day 7, strip 14)

She made plans with Domic and Tairil (who claimed Mauki was in on the plan as well) to challenge Lexx one after the other once the time limits expire to slow him down. She considered the fact that she would have to let them use Lexx a couple of times in return a small sacrifice she was willing to make. (AD Day 20, strip 10)

She has been told by her father to leave Lexx alone, but she hasn't listened. (AD Day 21, strip 35)

She would later crash the party Damian was throwing for Lexx, and demand that since she couldn't challenge him, he needed to challenge her in front of all the witnesses, and she would promise if he won to leave Earth immediately afterward and never come back, nor touch a hair on his human toy's head. (AD Day 21, strip 157) When he refused, she said if he didn't she would start an inquiry that he broke a rule by playing on his world of origin, and though he wasn't born on Earth, the rule was open to interpretation and she was sure the council would back her and reset his game, so he agreed and challenged her. (AD Day 21, strip 158) Lexx would win against her again. (AD Day 21, strip 168)

As a child she had normally been a polite little girl, but seeing her father spending time with Shira Lessa changed her demeanor from smiles to baring her fangs whenever she thought Lessa wasn't looking. (AD Day 24, strip 41)