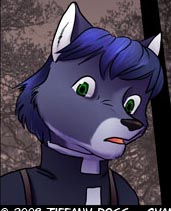 He comes from a very poor family that only consists of himself and his mother. He does not know of any other relatives and they live in a somewhat run down apartment in one of the lower areas of Centralis (run down by Cyantian standards, not by human standards) - it's shelter and it's free as long as Vin is in school. They are supposed to upkeep it themselves, but Vin doesn't really know how and his mother just doesn't bother. He has never known his father. According to his mother, he left before Vin was even born and he shouldn't talk about it. To have such a father was a shame to she and him. It was better to just accept that there was not a father. Vin feels that he is the reason his father left and his mother is so miserable. They could easily request aid from the Centralis government, but Vin's mother has never done that. She has never stated her reasons for this. Most of the time, they don't have enough to eat and their clothing is constantly in need of mending.

In transitional school, Darius sits next to him, much to Vin's displeasure. (Akaelae, strip 45) Darius took an immediate liking to him and ended up befriending him by buying him lunch. (Akaelae, strip 58) Celina seems to have taken an interest in Vin as well. (Akaelae, strip 61) After school, he is offered Darius' coat, but declines out of confusion over why they would offer it. (Akaelae, strip 87)

After trying to find a new home he would run into Darius, who would buy him lunch and suggest he live in their play house. (Akaelae, strip 168) Upon finding Darrik there, Darius would decide to bring them both to Akaelae Towers. (Akaelae, strip 177) Vin is currently in Akaelae Towers after being brought there by Darius and learns of his father's origins - and is not happy about who his father turned out to be. (Akaelae, strips 268) But he had yet to learn that his mother and Oran were murdered by his father.

He is rudely awakened one morning by Crissy, (Akaelae, strip 291) who sends him down to the tailor to have a whole new wardrobe made for him to be ready the next day. The huge turn-around in his life had now made him one happy Wolf. While there, his thoughts would turn again to his mother, and he would implore Syrys to find her and get her away from Oran. (Akaelae, strip 391)

He is sensitive about his appearance, especially over his slenderness. (Ate age 14, he is 5'3" and 145 lbs) Unlike Darius, the females treat Vin with disdain for this.