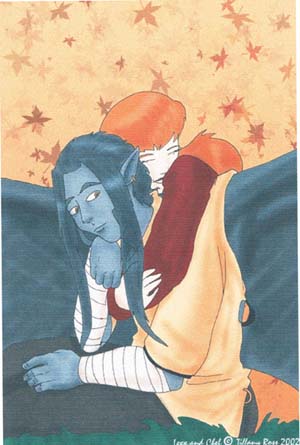 Not titled - but posted with an image of Chel and Lexx with a backdrop of falling leaves.

Lexx blinked in the bright sunlight, sinking into a pile of gold and orange maple leaves. There was no one for miles, no humans who could ruin the sounds of fall. The leaves rustled all around him in a brilliant kaleidoscope of color. It was beautiful, like nothing he had ever seen.

Now, he stared upward, a slight smile playing on his lips. The sun was warm and the breeze cool. He'd been on many worlds, each one had its own beauties, but this one was special. This one was home. No matter how many generations were born in space, they were all anchored here. It was unfortunate he couldn't really enjoy it like an ordinary human. Out here, he was fine, even with his blue skin and billowing leathery wings.

No one would see him. He fell back with a sigh, flexing his wings out behind him to lay comfortably. It didn't matter. He was here alone. "So,? Chel, what are you doing right now?" Lexx whispered softly.

She'd been on the island earlier, helping him with a few things while on vacation from the university. He didn't fully understand why there weren't any classes. They started up, then they ended for several days at a time, most of the time only two days, but this time, it was a whole week.

This was a time you are with your family and give thanks for the good things in life. Perplexing. Lexx couldn't fathom taking time off for such a thing. What if you didn't have a family? What if you really had nothing to give thanks for? What if you were simply lost and unsure of what to even be thankful for?

He was jealous. Chel went home. Several hours ago. She could come and go as she pleased thanks to a genetically coded remote. Lexx had made sure only she could use it, considering her father would probably like nothing better than to track him down and strangle him. At least he really cared for his daughter. That was something. Lexx wondered, if he ever had a family and a daughter, would he be that way? He liked to think he'd be a good father.

Maybe here on Earth, the family he would make wouldn't be split up. It was less dangerous here, even with the humans who would like to 'ask' him numerous questions. So far, he'd easily avoided them and there was no way they could find him. Lexx closed his eyes, feeling a stinging warmth in them. He was still smiling, allowing himself to daydream. Bittersweet happiness. What a weird thing.

He had plans. He'd already begun putting them into motion, learning the ways of humans and how to 'legally' acquire the things he needed without divulging his existence. Chel had been his biggest help in all of this, explaining the value of earth money, how to get it and how to use it.

Lexx sat up, running the back of his hand over his eyes. He really wished he could be with her right now, enjoying this day she called a holiday. He'd be reluctant to eat anything. Getting used to the new foods he had to eat on Earth was a trial. Everything disgusted him and made his stomach queasy. Chel always insisted it was all in his mind and reminded him how on the first day, he'd loved the cereal and milk until she'd let him know where it came from.

"Lexx?" For a moment, Lexx thought he was imagining things, then Chel dropped to her knees behind him and wrapped her arms around his neck. "Stealth said you were here."

"Yes." Lexx smiled. What a pleasant surprise. He thought she would be busy all day.

"You didn't think I was going to just forget you on a day that I said was for spending time with family and friends did you?" He could feel her warm breath on the back of his neck and for that moment, was thankful. Things were better, so much better than they had been before.

Lexx turned playfully, careful of his wings and grabbed for Chel. She giggled and fell back into the grass. "Where are you going?" He lunged toward her.

"Stop that!" Chel managed to get to her feet, only to have Lexx get his arms around her waist and pull her against him in a firm embrace.

"Like I said, where are you going?" Lexx whispered, giving her a pathetic look. "You wouldn't leave me here alone would you?"

"Never." Chel smiled, leaning against Lexx. She tilted her head to look up at him. He was smiling. There was nothing she liked more than seeing him smile. His eyes gleamed with an intensity that had barely been noticeable when she'd first met him.

"Good." Lexx sighed and pressed his face against her hair. "Good?."